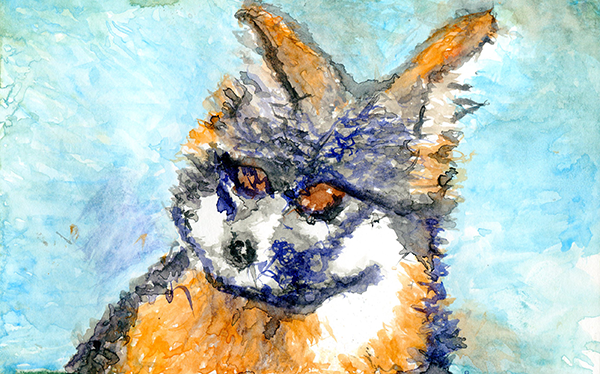 I found this creature by searching for endangered species success stories. I wanted to find an example of successful advocacy.

The species has lived on the island for about 18,000 years, but in the 1990s, golden eagles moved in and began to prey on the fox, causing fox population to decline by 95%. In 2004, with fewer than 100 animals remaining, the fox was designated an endangered species. The Nature Conservancy, together with the National Park Service and other federal and state entities, mounted a science-based recovery effort that became one of the most successful in US history. (Read more on the Nature Conservancy website.)

I intended to paint the whole little (4 pounds) fox. I was still reading about the animal and chanced upon a different image that was more of a “headshot.” I liked it better and began again.

Background blue first, then I worked on the eye and nose, trying to maintain white catch lights. I alternated between gray and orange to bring the rest of the head and chest into being. I discovered that the only black I could find was lower quality paint from an old tray. Unhappy with that, I found a higher quality and began painting with it before I realized it was a dark blue.

As I worked with the scan, I became more bothered by the extra marks in the irises of the eyes. I made a couple of digital options, one with eyes blank and the other with pupils digitally added. I’m not thrilled with either. I would need more practice with Photoshop to create better options.