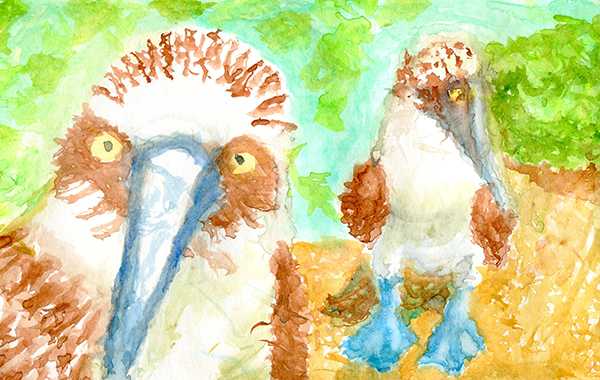 There is a video of courtship on that page. Note the background music chosen. What does that say about humans?

I searched for “whimsical” and “endangered animals” and found my way to various images of this bird. It’s the improbable blue feet, I think, that put it in the whimsy category.

What’s with the name? “All half-dozen or so booby species are thought to take their name from the Spanish word “bobo.” The term means “stupid,” which is how early European colonists may have characterized these clumsy and unwary birds when they saw them on land—their least graceful environment.” (National Geographic) Boobies are nimble flying and diving.

The final painting scanned here is my third attempt at this composition. I started with a pencil sketch but discovered in no time that I can no longer push pencil against paper strongly enough to make a dependable mark. I hadn’t realized that using paint is an accommodation!

In attempt number two, the beak of the bird on the left was in the wrong place and painted too solidly. I was attracted to the reference image because of the reflections on that beak. I needed to preserve more white areas to represent that reflection.

Finally, I was happy with the layout of the painting and the preservation of white space. I painted the blue feet of the bird on the right first. Then, I painted the background, making the sand in a pointillist style, dot by dot. I brushed blue for the sky and scumbled different greens for plant life. The negative space, not painted in background, created the shapes of the birds.

I painted the beaks and the yellow of the eyes. I asked for (and received) help painting the black irises. I didn’t trust my shaky head to create small, controlled dots. I painted brown wings and head feathers twice (to increase the vividness of the color.)

Adding the shadow be down neath the bird was a bit problematic. I tried blue first, primarily because I had it in front of me and I was tired. That looked strange, so I added some brown. I didn’t like the look of it when I was painting, but I am happier with it now. Adding some gray to the bird’s bodies helped show volume.

My last painting session was to better define the shape of the head of the bird on the right, bringing greenery and sand in a little closer.

I rotated (with help) the paper as I worked, so I could reach active areas.