Creative Experiment: asking for and receiving help is about play and trust

Kind Promise: I will ask for and accept help gracefully.

Creative Experiment to explore asking for and receiving help: 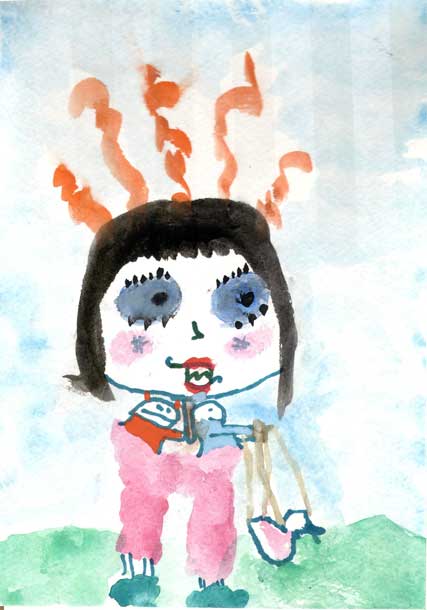 For example, my 14-year-old daughter, Alexis, and I agreed to play a painting/drawing game creating a cartoon character. I began by painting eyes and asked her to add a nose and mouth. She asked me to add hair.

We continued taking turns and asking for help for a short volley until things took an unexpected turn: she asked me to add pants and I did. I am unable to make fine lines so those were some big pants! I also accidentally smeared a little bit of red in the empty space beside the pants. “We will turn that into something later,” I said. Play continued.

I asked Alexis to connect the head and the face. A tough request! She considered our work and got a gleam in her eyes. She added two figures inside the pants legs, one figure holding the head on a stick. Everything changed; the piece was now about puppeteers! The errant red smear became a marionette duck. The puppeteers became a devil and angel. We played the game until Alexis had to leave.

What I learned from this experiment.

I participate in creative experiments because they take me into unexpected, but valuable, territory. It turns out that when asking for help, I need to enter into the spirit of play. When receiving help, I need to focus on trust. Maybe it’s as simple as that.