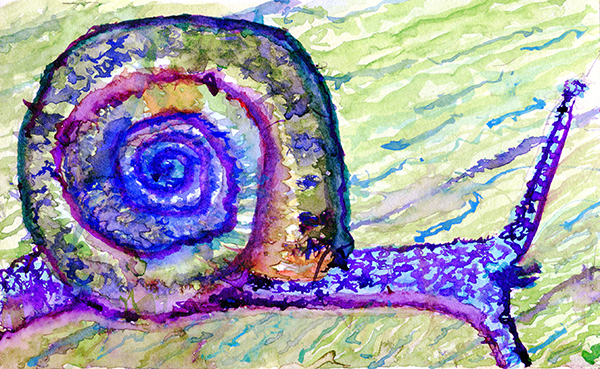 I began with a pencil sketch. The forms in this painting are quite simple. I decided not to struggle with making the spiral mathematically correct, but to surrender to the limitations of my body.

The next step was to add basic color and form – greens and blues. I was pleased with the look of these washes.

I added more intense color over the next few painting sessions, adding stripes on the shell and spots on the body, as well as grain marks on the background. It was a challenge to keep the volume of the snail obvious. It would easily flatten out.

I was a little confused about the protuberances coming from the head of the snail. Not long ones, but the short dark area coming directly from the head. It would have been good to look at some close-up photos before painting that area, but I didn’t. I looked at photos after the fact. I would paint it differently now. Mea culpa.

In the end, the snail looks flattened out, despite my effort to represent volume. Next month, I hope to do better in that regard.

I like the wild design of this snail. Even though I was trying to represent what I saw, the colors look quite fanciful. (After scanning, the purple really pops!)

As usual, it took several sessions to complete this painting. When I get tired, but continue to paint, the brush moves in an uncontrolled way and I make marks that I didn’t intend to make. Mistakes make me crabby! It would be much better to recognize my weariness and stop painting. During the creation of thisboggomoss snail, I tried both pushing ahead and surrendering patiently. The latter works out much better! I will know I have learned the lesson when I can skip the pushing/bad mood in favor of backing off and coming back to work a different day.