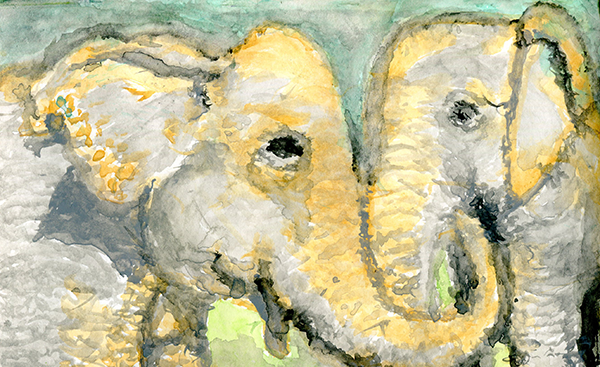 Now that I’m done with my series on the Buddhist paramitas, I am returning to contemplating my traditional kind promises. I’ve chosen the promise: I will create, nurture, and celebrate life-giving connections. I spent some time googling endangered animals that move in herds, flocks, and colonies. Because I want to emphasize relationships, I decided to go with a mammal. Elephants are photogenic in this regard because they tangle up with each other. I looked at available images and found one I recognize. I used this as a reference photo when I was using watercolor pencils in December 2017. I’m happy to return to it.

I cropped the reference photo to emphasize the connection of heads and trunks. I want to paint the taller elephant slightly shorter, so the top of her head fits in the frame. Color?

I like the way things are going! First, I blocked in elephant shapes and painted the highlights in trunk and body with tan. Those highlights are created with the combination of sunlight hitting the dusty areas of of the elephants. I decided to stay with a gray color for most of the rest of the elephants, trying to work somewhat loosely. I left the eye areas completely blank.

At another session, I used black to begin to add shadow areas. Yesterday, I painted sky and grass. Today, I added the eyes. That was nerve-wracking! I was working in black with a smaller, finer brush. Even though I did this first thing in the painting session, my control is limited. I would make a mark and it would change the elephant’s expression. I didn’t want mean eyes! I purposely made the eyes a little bigger than they realistically are, so I could have more control.

I also added more light and shadow (gray and black) on the lower half of the painting. I was working toward volume. Right up until this point, I thought of adding some pinks, blues, and purples into the painting. I liked what was happening and didn’t want to “ruin it.” This goes against Melissa Dinwiddie’s rule “#7. Take the riskier path.” Oh well, maybe next time.

As I moved along the left side of the paper, a happy accident occurred: my brush skipped along the side of the elephant, freshly dipped in gray paint. The stippling gave the elephant skin a rough appearance. I did it on purpose the rest of the way up until I realized I was out of energy.

Next time: work on the top half of the painting (perhaps turning it upside down) to bring the elephants into the foreground, better form the ears, and add some volume to the top of the trunks. I think one more session will do it…

Later note: It did. I considered adding areas of bright color until the end. I wheeled away from the easel and spent some time looking at the painting and declaring it finished.