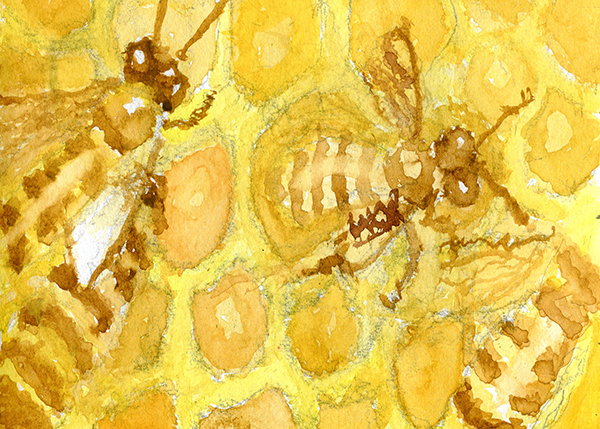 for mindfulness month, I wanted to work on an image that would involve repetition. I thought of painting insects, so I would have several bodies to paint. That reminded me that honeybees are in danger and I haven’t painted them before. I googled “bees” and found a nice image which, it turns out, is in a magazine with the mission of “keeping women connected.”

Someone who is great at math and geometry would paint a more true-to-life honeycomb. I struggled with the shape of a honeycomb cell (hexagonal, I think) and how the cells fit together. My first thought was to draw the honeycomb and put the bees on top of it. Once I started drawing the bees, I realized that I could tell where to draw the cell walls by using their relationships to choose line bee body parts.

The bee wings showed in the photo in three ways: some were nearly transparent, one glistened, some were folded. All of them had veins visible in them, some of which had a reddish color. I was most worried about the glistening one and I think that is the most successfully painted. The brush went wild a couple times as I painted veins. That was unfortunate for the painting, but fun for the snippets.

The bee bodies also glistened. The most successful portrayal of that was when I painted the stripes and quickly swiped down the body with a wet brush. Less successful were the areas where I split the stripes.

In order to show depth in the cells, I needed to mix a darker shade. I discovered that I couldn’t make a predictable hue. That added to the chaos of what should be an orderly comb.