Joy: the beauty of anger, the alchemy of art 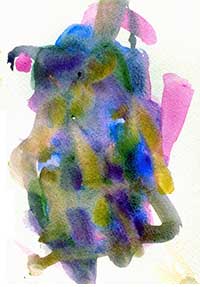 Kind promise: I will live joyfully without reason.

I was feeling snarly and I wanted to do something with it so it would not weigh me down or come out sideways at people. I picked up a paintbrush. “Red,” I thought. “Black.” My first painting teacher, though, taught us never to use the black from the bottle. Instead, he demanded that we mix it. So I started choosing colors from opposite sides of the color wheel. I tried to make angry strokes. That didn’t look angry enough, so I pulled out my iPad. Forget paint. Electronic black is black. So there: And I can smear it all together in my anger and make this: The magic alchemy of art is complete. Lead turns into gold. My anger has transformed into joy.