The savior amidst the brambles 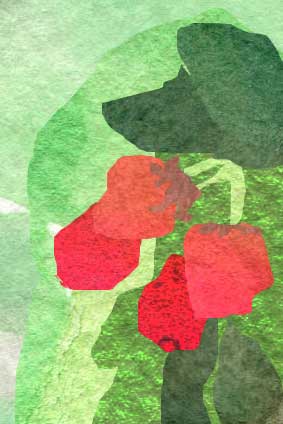 My mother is standing at the front door. On the porch is Pete from down the block. I am peeking from behind my mother’s skirts.

Pete is an old man. A blue checked shirt and blue striped overalls cover his stooped shoulders. His gnarled hands hold a gift basket of raspberries. I have seen him working in the large berry patch behind his house. He is telling my mother about meeting Jesus in the raspberry canes.

My childish mind is not following the words of the conversation, but the emotional undertow. Pete’s wrinkled face, beneath his shock of white hair, is aglow. His soft voice is full of conviction. My mother teeters between celebration and skepticism. Daughter of a country preacher, her younger self wants to believe in holy visitations.  Her middle-aged self, having weathered a college education, World War II and two miscarriages, finds it hard to accept a Savior in the brambles. But mother is, above all, a kind woman. She accepts the raspberries reverently, says the right things to Pete, and sends him on his way confident that he has spread the good news.

The berry patch, Pete and my mother are gone now. Forty-five summers later, my tongue chasing a raspberry seed out of a molar, I remember Pete’s gentle witness and smile at our determination to find holiness amidst thorns.